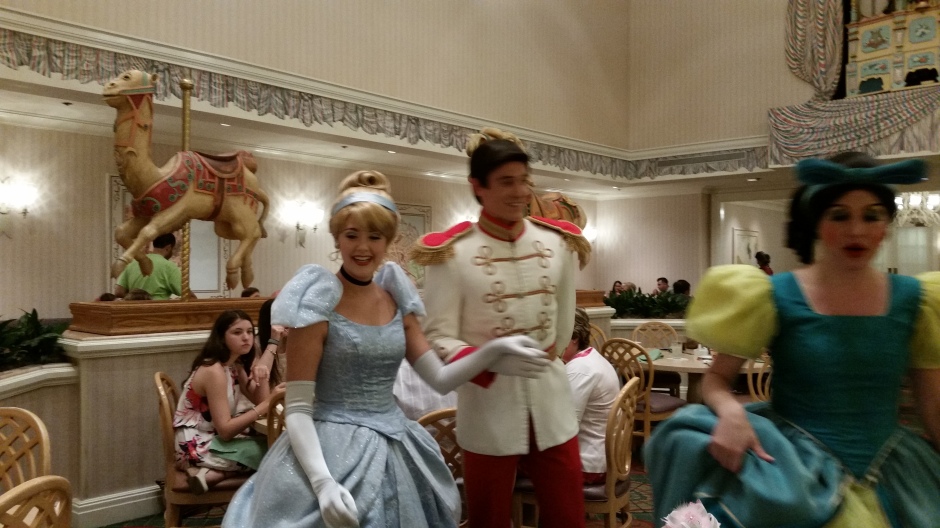 So, I think you might agree, the Princesses get all the attention. And they are worthy! These ladies probably spend a lot of time getting their hair coiffed, their makeup perfected, and have to tote those gowns all day (except maybe Jasmine and Ariel) – not to mention the hours of practice on their waves, smiles, and witty remarks. They are great. But we don’t see enough, or hear enough, about the men behind the women!

Let’s see who we have. Snow White’s prince, whose full name is either just The Prince, or some speculate it is Ferdinand (but isn’t that a bull?).  Cinderella is coupled with Prince Charming, Ariel with Eric, Jasmine and good old Al, Aurora and Prince Philip, and Rapunzel with Flynn Rider.  There are others like Belle and Beast, Tiana and Prince Naveen, and Pocahontas and John Smith. We once saw the addition of Giselle and Edward (of Enchanted) for a brief time.

This summer, I’m going to go set my sights on meeting the princes. Top on my list is Prince Charming, then next, Flynn Rider. Where can I have these magical encounters? I did some research!

Prince Philip is tough. He rarely comes out for a meet, but has been seen during True Love week in the past in Magic Kingdom. Prince Eric, I’ve found is also rarely available for meets in the U.S. parks. Snow White’s prince too can be seen mainly during special events.

I have had the pleasure of meeting Beast! He will accept guests at Be Our Guest Restaurant in Magic Kingdom during dinner time. Prince Charming hosts the Cinderella’s Happily Ever After Dinner at 1900 Park Fare in the Grand Floridian (I see a dining reservation in my future). Prince Naveen occasionally accompanies Tiana in her meeting spot in Magic Kingdom. I’ve seen Aladdin over in Epcot upon occasion!

The Festival of Fantasy Parade at 3pm in Magic Kingdom has many characters and among them is Flynn Rider! Even if he doesn’t host a meet n’ greet, I’ll settle for this beautiful float. You’ll also catch a glimpse of some other Princes during this and other parades in the parks!

Hopefully in the future, we’ll see  an interest in the princes, and they’ll get their turn in the spotlight.  In the meantime, I’ll have some fun playing in the parks! You never know what is around each corner or what surprises are in store. Isn’t that part of the excitement?