So why should you peruse the Buena Vista Theater while on a Disney Cruise? Tim tells you why.

What is the Buena Vista Theater? Well, not to be confused with the Walt Disney Theater, which shows the live entertainment shows like Believe, The Golden Mickeys and sometimes Villains Tonight. It sometimes depends what ship you’re on. For instance, the Disney Magic has Tangled: The Musical, while the Wonder has Toy Story: The Musical. But I digress . . .

But why to me is the Buena Vista Theater such a highlight on a Disney Cruise? Well, for me, I love Disney movies. Not just the classic Disney animated movies. But every kind of Disney movies. In fact, with the advent of digital copies of movies lately, the ONLY movies I still buy on Blu-Ray or DVD are Disney movies. That extends to the Disney live action movies, Pixar animated films, Star Wars, and my personal favorite, Marvel Studios movies. The latter is why I prefer to see these movies at the Buena Vista  Theater. In fact, I book my Disney Cruises around which Marvel movie is being released. On both Disney Cruises I’ve been on, I saw Avengers: Age of Ultron AND Captain America: Civil War. Both movies were a highlight. 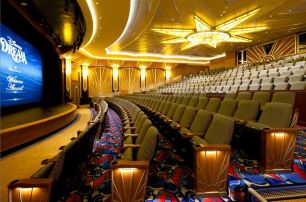 I’ve been on two Disney Cruises now. Both of which have been on the Disney Dream. Every time I get my personal navigator pamphlet when I check in, I open immediately to the movie section. I will often plan my entire trip week around what movies I possibly want to see. As a big time Marvel fan, the priority will always be the Marvel movie that comes out while I’m on my Disney Cruise. Secondarily I’ll see what other movies I want to see in the theater while I’m there.

In fact, sidenote, if you are on your Disney Cruise the same week or day a movie is premiered, you will get treated to a special movie “PremEAR.” The lobby by the theater is decked out with memorabilia for the movie.

Not only does the Buena Vista Theater show really good movies, but it is a good moviegoing experience. The chairs in the theater are really comfortable and there are plenty of snacks able to be purchased at the concession stands. Both provide for a great moviegoing experience. Recently, though, you’re able to get really neat popcorn buckets. Like the Darth Vader helmet or even the BB8 cups. You would think the BB8 cup wouldn’t fit in the cupholder but it fits perfectly. They also have standard popcorn buckets that you would get at the DisneyParks.

Now, as you’ll find out on your Disney Cruise, the Buena Vista Theater is not the only place you can see movies on the ship. Disney movies will sometimes show in the late evenings in the Walt Disney Theater, where the live entertainment is. I really think the movies shown there are pretty good too. Most times the Walt Disney Theater, they’ll show 3D movies. So if 3D movies aren’t necessarily your thing, then you’ll want to stay away from that. Of course, there’s Funnel Vision on the outer deck of the ship. Often they’ll play classic Disney movies. The highlight of the Funnel Vision screen is when they show the first Pirates of the Caribbean movie on Pirate Night.

Overall, the Buena Vista Theater is a very great theater and provides a wonderful moviegoing experience. It is a highlight among many highlights of a Disney Cruise trip. It should not be overlooked when on a Disney Cruise. I would highly recommend checking out at least one movie in this venue while cruising. 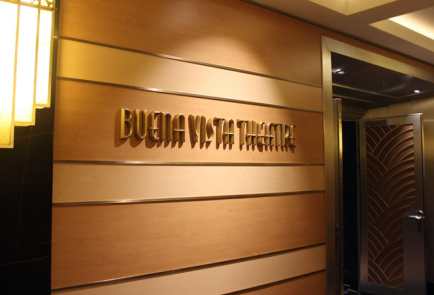 Tim Costello, Adventure Guide at Adventure Is Out There Travel, LLC

One thought on “Why Buena Vista Theater is a Cruise Highlight”