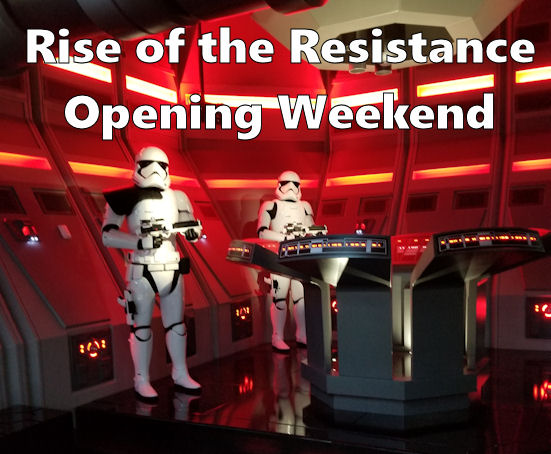 You know when you plan a Disney trip, months in advance and it’s planned for “off season” so you expect low crowds? Ever had that change with one Disney announcement? I did!

My best friend asked me to join her for a trip to Disney World in early December. She had a conference and I would be tagging along just to have fun. She made the conference reservations and I made my flight reservations. Fastpasses were reserved and then BOOM!! Disney announces the opening day of Rise of the Resistance is during our trip.

I knew from my research that opening weekend of a ride can be bonkers and with a Star Wars ride, I expected it to be even worse. Opening day for Rise was the day we arrived in Orlando, so we missed that craziness, but knew the whole weekend would be busier than we originally expected.

If you haven’t read about the issues with Rise of the Resistance opening weekend, let me update you. The ride had problems. It went down A LOT. That’s actually something that is normal for a new ride. It’s not used to the volume of riders and there are going to be kinks in the system. Evidently, not everyone expected that. Disney cast members had people screaming at them because they couldn’t get on the ride. How do I know? I witnessed it. I felt really bad for both the cast members and the guests who had traveled to Disney World just to ride this new ride.

My friend and I got lucky. We had read about the issues and had been doing research on how the boarding groups worked and when they opened. The first couple of weeks, Disney was inconsistent with the opening of the boarding groups and the opening of the park. We decided to head to Hollywood Studios a couple nights before our planned morning in the park to ask questions. We headed straight for Galaxy’s Edge and stopped to talk with 2 cast members about 20 feet from the entrance.

We asked what time we needed to be at Hollywood Studios to get in a boarding group and how the process worked. The cast members told us 4am, YIKES! (That has changed. Disney is not opening boarding groups that early anymore.) We chatted some about the ride and as we stood talking with them a woman walked up to us with 3 tickets in her hand. She said she was leaving the next day and Rise of the Resistance went down while she was on it and wouldn’t be back up for the rest of the night. She then gave us the tickets saying she didn’t want them to go to waste. SCORE!! We thanked her profusely and then went to check how to use the tickets and if we would be able to use them the next day even though they had that day’s date on them. This is when we witnessed the fury of Star Wars fans. They were yelling at cast members in force. We nicely asked our questions and got out of the melee.

We were able to ride Rise of the Resistance the next day due to that woman’s generosity. We passed the 3rd ticket on to a man we saw

Our last day we did use the boarding group process to get on the ride. If you want to ride Rise of the Resistance be inside Hollywood Studios BEFORE official opening. This means leave your hotel AT LEAST an hour before official park opening or Extra Magic Hours. You must have been through the Hollywood Studios gate and your park ticket/magic band scanned to get a boarding group.

Lessons learned from this experience.

Don’t be afraid of a ride opening weekend, just be patient, keep a positive attitude and ask lots of questions of how the new ride process is going to work.